Older Workforce in Clackamas County and Retirement Trends in America 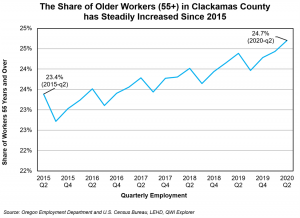 In the second quarter of 2020, the 55 age and older workers made up nearly on quarter of the workforce (24.7%) in Clackamas County with 40,429 workers. The industries with the largest share of older workers included mining (38.7%), agriculture (34.8%), utilities (31.3%), and transportation and warehousing (30.4%).
Not all of these industries with the largest share of

workers employed a large number of workers, though. The industries with the largest number of workers were in healthcare and social assistance (5,562), manufacturing (5,168), retail trade (4,163), construction (3,460), and private educational services (3,179). 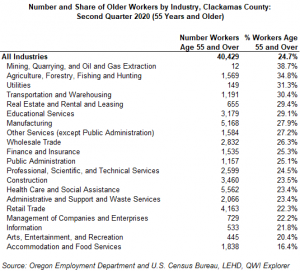 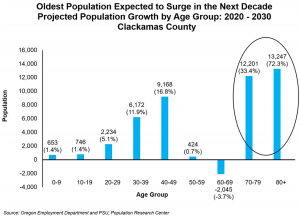 Changing Landscape for Older Workers and Retirement in America

The changing landscape of retirement may be causing a significant portion of older Americans to push back their retirement dates or to re-enter the labor force. Not only are Americans living longer but they are also working longer into their retirement years. According to a recent Post-2020 Retirement Survey conducted by the American Advisors Group (AAG), seniors are working later in life and the uncertainty created by the events of 2020 have accelerated the trend to make ends meet. According to the Post 2020 Retirement Survey:

Nearly one-third of seniors stated that 2020 had a negative impact on their retirement plans.

More than 1 in 5 seniors said 2020 caused them to withdraw additional money form one or more retirement accounts.

Forty-six percent of respondents indicated that they plan on working part-time or picking up a side job during their retirement years.

Nearly 1 in 5 seniors responded that they now plan to work past age 70 and an additional 12% indicated they plan to work full time for the rest of their lives.

Another survey from the National Institute on Retirement Security (NIRS) was conducted by Greenwald Research in December 2020 Retirement Insecurity 2021, Americans’ Views of Retirement. This survey was carried out to help understand Americans’ views of the shifting retirement landscape. A total of 1,203 individuals, aged 25 and older, completed the survey. The key research findings are as follows:

More than half of Americans (51%) say that the COVID-19 pandemic has increased concerns about their ability to achieve financial security in retirement. Sixty-seven percent say that because of COVID-19, they plan to retire later than originally planned.

More than two-thirds of Americans (67%) say the nation faces a retirement crisis and more than half (56%) are concerned that they will not be able to achieve a financially secure retirement.

Americans across party lines have a positive sentiment about pension plans and support making these retirement plans more available to workers. The vast majority of Americans (79%) agree that Social Security should remain a priority of the nation no matter the state of the budget deficits.

Sixty-six percent of Americans have a favorable view of defined benefit pensions. Seventy-five percent say that all workers should have access to a pension plan so they can be independent and self-reliant in retirement. Sixty-five percent agree that pensions are better than 401(k) accounts for providing retirement security.

The share of older workers (55+) in Clackamas County has been slowly increasing from 23.4% in 2015 to 24.7% in 2020. The industries with the largest number of older workers in 2020 include healthcare and social assistance, manufacturing, retail trade, construction, and private educational services. It will be interesting to see whether the 55 and older workers’ share of the workforce continues to grow as the proportion of the older population (70 years and older) continues to grow at a fast pace in the next decade while older workers face the decision to retire – or not.