Give Us the Ballot

Martin Luther King Jr’s May 1957 “Give Us the Ballot” speech in D.C., King called the right to vote one of “the highest mandates of our democratic tradition.”

His words resonate all too well today… 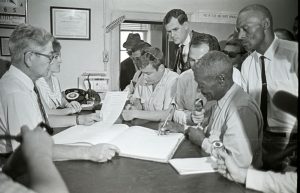 organizations, colleges and universities – nearly every type of institution with a social media account has some statement about fulfilling the vision of the iconic American activist. Many of these posts reflect a sincere respect for the legacy of the late civil rights icon, and a desire to continue building a more equitable and inclusive society, free of racism and oppression. For others, this is simply a note for the editorial calendar – a way to remind customers that their favorite cereal company isn’t racist. The most nefarious of these posts, however, come from entities and

individuals who actively seek to undo Dr. King’s work – specifically those working to restrict voting access and to disenfranchise voters from marginalized communities.

Democratic representation has been a central theme in the story of the United States since its inception. The nation is literally the end-result of a fight for self-determination, a people’s struggle against a government over which they had not influence or control. Yet, even after the fledgling nation formed a government “by the people, for the people” not everyone living in the United States was afforded the right to vote. Age, gender, race, and class determined who could and could not vote. For decades, only white, landowning men of certain age had access to the ballot. Their interests alone shaped the laws and institutions that governed society. Through decades of struggle that spanned centuries, the right to vote expanded to others: the poor and working classes; Black, Indigenous, and People of Color (BIOC); women; immigrants and naturalized citizens; and other traditionally disenfranchised communities. The right to vote – unencumbered by individuals or institutions – has been a key element of our nation’s greatest social movements: civil rights; women’s equality; the labor movement; and more.

Depending on how you are positioned in life – the way you look; where you live; your income status; your nationality; etc. – voting rights may seem like an issue that has been long resolved or has minimal impact. Maybe you are someone who has not had to be concerned about this because you, your family, your friends, and your community are not the kind of people typically impacted by voter suppression tactics. Maybe you do not come from a community which has historically experienced barriers to the ballot. Whether it has touched you personally or not, voter suppression has been ever-present in the United States. It is still impacting people today, as evidenced by the multitude of states enacting repressive and regressive voting rights legislation; weakening systems of oversight which ensure election integrity; skewing electoral maps; and more. 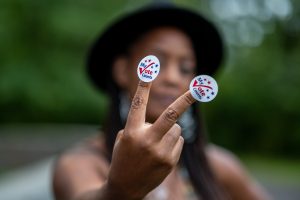 The health and well-being of our government, our economy, and our society hinge on the ability for all citizens to engage in the democratic process. Voters choose the leaders who represent their interests throughout all levels of government. They pass or reject levies and ballot measures. They determine the policies and practices that affect our schools; our communities; social services; housing; labor and worker rights; economic development; public health and safety; our national security; our environment; the legal system; etc. It should be concerning to all citizens that some powerful individuals and entities are acting to curtail voting rights, limit access to the ballot, and alienate citizens from their government. The greatest risk of disenfranchisement is faced by the people and communities least equipped to push back. This is an intentional strategy used to maintain the status quo and secure the interests of those in power. It is a move that will continue to perpetuate social, political, and economic inequities, that props up a system of governance that works well for a few at the expense of many.

These kinds of laws seek to silence and disempower people – something which every American should find repugnant. To suppress the will of voters is to eat away at the heart of democracy, and if democracy fails, the entirety of our institutions will fail with it. This should be concerning to every American, not just voting rights activists – if democracy rots, everything else rots with it: the economy; the labor force; business and industry interests; social safety services; and everything else that constitutes our daily lives. It is imperative that we use our collective voice – as individuals, communities, institutions, and systems – to ensure all Americans can freely and fairly participate in our elections and government.